A Cool Roof that reflects summer heat is really important to the Bimini Biological Field Station (BBFS) on the small tropical island of Bimini in the Western Bahamas. This beautiful little island is a 55 mile boat or plane ride from Ft. Lauderdale and South Florida. The BBFS  is also affectionately referred to as the “Shark Lab” due to their study of sharks in the Bahamas. 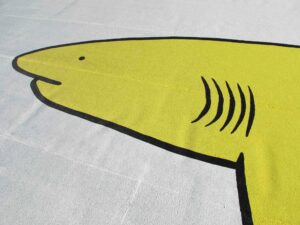 The BBFS called Acry-Tech  with a big problem, they were HOT! The roof over their structure was dark and the summer heat in prior years was making the interior of the building so hot that they routinely got above 98 degrees INDOORS!  They needed a Cool Roof solution that would reflect the summer heat and intense tropical sun.

I told them the best solution for them would be our Cool Top Heat Reflective Roof Paint and it would absolutely provide them with a really Cool Roof. Jim Barley, the manager of the BBFS arranged to have the Cool Top applied prior to the summer of 2011 and was surprised and  thrilled with the results. The Cool Top reflected so much heat that it’s now comfortable to be indoors during the day and when they kick on the air conditioners for the night, the building cools down quickly and is so much more comfortable. They’re also saving on their air conditioning costs with their new Cool Roof!

The BBFS relies on volunteers from a number of colleges that come to Bimini to work on tagging, collecting data and gaining a deeper understanding of sharks in the local waters of the Bahamas. These volunteers are a smart bunch of kids, but these young people need to refresh and cool down after a hot day of sun baked research. Because of their new Cool Roof, they can now spend the evening and night in cool comfort instead of sweating in their beds. 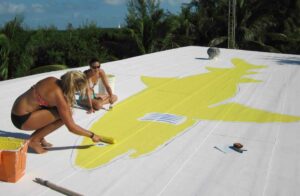 These creative kids also had another idea… Jim Barley called and told me they wanted to paint a big Lemon Shark on the roof of the building. When I asked why, he told me that the airport lies just west of the Shark Lab and airplanes pass right over the building. They wanted to make a mark and be easily identified from the air. Jim further explained that they wanted it BIG… at least 12′ high and 44′ long! I told him I was IN so he sent a color swatch for me to match up.

5 gallons of bright yellow paint and some bikini clad painters have now created a huge calling card for the Shark Lab in Bimini. I’m proud of these kids and so happy to be able to support their efforts. I’m glad they have a Cool Roof, too. Cool enough for bare feet in the summer!

Free shipping on orders over $100. ( Valid for U.S. purchases only.) Dismiss